I missed much of the fun at Lagree YYC last week due to Dot #2’s graduation on the coast. Apparently while I was out of town celebrating, my classmate Shelley realized one of my greatest fears when she lost concentration pitching herself less than elegantly into the abyss between the front and the platform of her Megaformer.

Can’t believe I missed it!

Len – Consort to Her Royal Lagreeness Kim Rothenberg – is convinced that Shelley’s lapse was the result of her becoming distracted by his derriere as he worked out on an adjacent Megaformer.

Len, Len, Len . . . I think we can all agree that while it is often about you, it isn’t ALWAYS about you. Shelley, I am glad about three things:

Lagree classes are not ideal for people-watching. You may admire a buff physique or a sublime spandex-clad visage on your way in or out of the studio but, as Shelley found out the hard way, losing your focus during the workout can have some unintended consequences.

Reminds me of one of my Long Suffering Husband’s old T-shirts that boldly and accurately states:

It’s only funny until someone gets hurt . . . then it’s HILARIOUS. 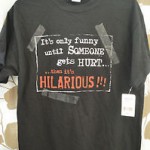 I have to admit some vicarious pleasure when someone more fit than I (Shelley, for example, and pretty well everyone else who walks through the Lagree doors) shows just how challenging workouts on the Megaformer can be. In addition to the concentration you need to stop yourself from pitching headfirst into the well, the Lagree Method is one tough – but infinitely satisfying – workout, whether you are a newbie or a fitness fanatic.

While in Vancouver last week, my sister asked me how my Largee classes were going.

“That’s Lagree, not Largee,” say I to my hitherto undiagnosed sibling.  “Largee is what I can soon say I used to be.”

That is thanks to the Lagree YYC team including the lovely Shannons, both of whom I was fortunate to encounter last week. Each is an amazing instructor in her own right. Shannon T gave a great Full Body – Light class. I love the way she says, “You’ve got this,” which is universal code for “I know this is $#@%ing hard, but hang in there. You’ll be glad you did.”

I check in with Shannon H, who previously provided me with my nutritional roadmap for success. (BTW, if you haven’t already done so, make sure to check out Shannon’s series of four Lagree YYC Fitness Blog posts – Eating for your Workout – to find out how best to fuel, recover, refuel and rebuild to further maximize your Lagree YYC workout.)

After an initial weight loss of 6 ½ lbs, my scale hasn’t budged much. Shannon reminds me not to be discouraged because other good things are happening.

It’s true. My clothes are getting looser and I can feel my body composition starting to change.

This is scientifically confirmed on Friday morning when I arrive for my class with Kim and encounter her hard-working consort sunning himself on the bench in front of the Lagree YYC studio, hiding the distracting asset that is rumoured to have launched poor Shelley into orbit earlier in the week.

I tell myself I am going to try to be nicer to that perceptive guy with the really nice . . . wife.